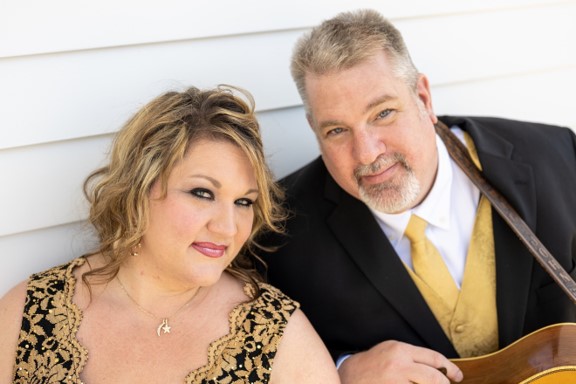 It’s been only three years since guitarist Big John Talley and singer Starlett Boswell Austin happened to meet, but in that relatively short time, they have made a sizeable impact on the bluegrass community.

The duo’s first album, Till The End Of The Road, helped solidify their standing, reaping widespread praise for both its impressive array of original material and its well-chosen covers. Indeed, it seemed certain that Starlett and Big John were well on their way to establishing a profound presence in today’s fertile bluegrass environs.

Then again, both individuals arrive at this juncture with well-stocked credentials. Raised in a musical family, Starlett became acclimated to bluegrass early on, winning her first singing competition at age four and subsequently learning upright bass by the time she was eight. Her adolescent years were spent performing with her family’s band, prior to venturing out on her own and performing with other artists and outfits as an adult.

For his part, Big John can claim a musical resume that extends back over 41 years. He too became acclimated to the sounds of bluegrass at a remarkably early age. He first picked up guitar at nine years old, and remarkably, by the time he was 16, he was cited with heady honors, the VFMA Male Vocalist of the Year Award. Barely a year later, he and his band New Dominion Bluegrass were guesting with Bill Monroe’s at the Grand Ole Opry. He continued to perform with Bill Monroe and his Blue Grass Boys, as well as other notables as well, among them, Jody Rainwater (Lester Flatt and Earl Scruggs’ bass player), Tater Tate (Bill Monroe’s bass player and fiddle player) Jackie Phelps (one of Bill Monroe’s guitar players and a star of the hit TV show “Hee Haw”), The Virginia Squires, Wyatt Rice, and plenty of others as well.

The two met by chance in January 2019 while they were filling in with a band in North Carolina. There was an immediate chemistry between them, which became apparent as they began working together with other ensembles. Things really began clicking both personally and professionally when Big John was performing at the Bluegrass First Class gathering in Asheville, North Carolina and Starlett, duly impressed, approached him about starting a band. After sharing a few tunes and getting better acquainted, it quickly became apparent that they had many similar musical interests that drew from the same set of influences. They included Bill Monroe, The Osborne Brothers, Jimmy Martin, Larry Sparks, Del McCoury, The Stanley Brothers, Johnson Mountain Boys, Tony Rice, Lester & Earl, Peter Rowan, among them.

“Starlett is absolutely the most talented person I have ever seen,” Talley said. “Her singing, playing and songwriting is only second to the size of her heart and her delivery of the music. She truly feels every note she sings, and plays every note she feels. When it comes to putting it all in there, she’s right there punching. A true Virginia Songbird.”

For her part, Starlett makes no secret of her own enthusiasm. “Making music with Big John has been a once-in-a-lifetime find,” she maintains. “When you meet that person you musically click with, everything seems to fall into place. The sky’s the limit.”

On June 1, 2019, they made their debut as “Starlett and Big John” in Iron Gate, Virginia, and have been going strong ever since. Their Rebel debut Living In The South features Starlett on bass and vocals, Big John on guitar and vocals, along with the solid support of David Carroll on banjo, Johnathan Dillon on mandolin, and Ron Stewart, who also produced and engineered the project at Starlett and Big John’s studio in Southampton, Virginia, guesting on fiddle throughout and adding Dobro to the title track.