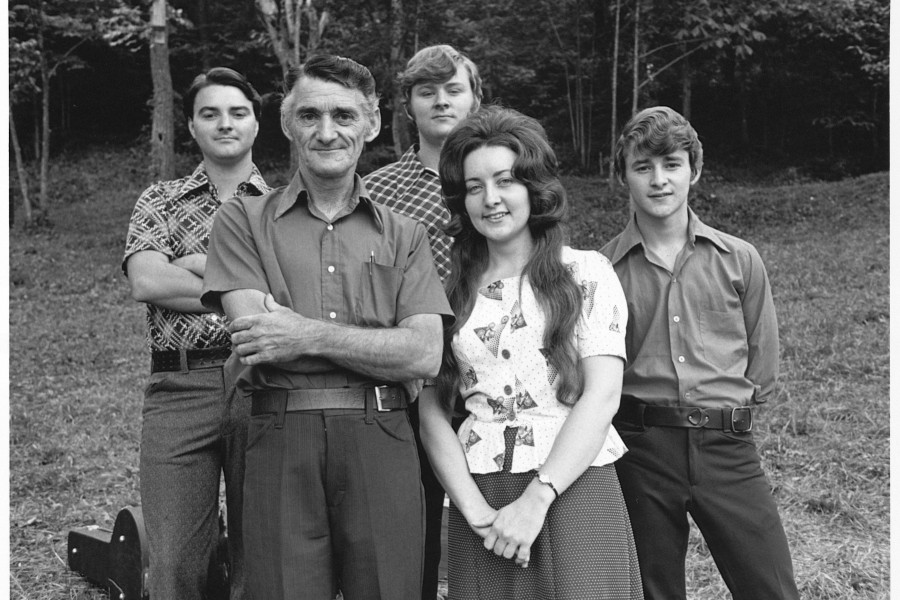 The Marshall Family burst on to the bluegrass scene – from seemingly out of nowhere – when they appeared on a Sunday morning gospel sing at Ralph Stanley’s bluegrass festival in May of 1974.  They weren’t scheduled to be on the festival.  Stanley himself had learned of the group only a few days earlier when one of the band members showed up at his front door with a tape of the group and an earnest request to perform at the festival.  It was a bold gamble on David Marshall’s part but it paid off handsomely.  The group was enthusiastically embraced by the Sunday morning festival goers.  More importantly, they gained a de facto manager/booking agent – Ralph Stanley – and secured a recording contract with Rebel Records.  Not bad for one day’s work!

The group was comprised of family patriarch Chester “Pop” Marshall and his children.  David played banjo, sang lead, and wrote songs for the group; Judy played guitar, sang, and also wrote songs; Ben played bass and sang; and Danny played mandolin and provided the bass vocals.  Their appeal was multi-faceted.  At the top of the list was their harmony singing.  They perfected a blend that only families seem to achieve and they delivered it with, to quote Ralph Stanley, “feeling.”  Quality original material was another important component and the band was blessed with two prolific songwriters, Judy and David.  Many of the Marshall Family’s most requested numbers were written by these two.  Lastly, the group radiated a genuine enthusiasm about their music, and it was contagious.

Come Springtime was the first Rebel release by the Marshall Family.  With one exception, the traditional “Children Go Where I Send Thee,” all of the songs were Marshall originals.  In additional to the title track, other new favorites included “I Just Want to Thank You Lord” and “Take a Little Time for Jesus.”  Bluegrass Unlimited reviewer Walter Saunders praised the group, noting that “only occasionally does a new group emerge on the scene that is worthy of more than passing interest.  The Marshall Family are such a group.”

The second Rebel album by the Marshall Family was called Requests.  Unlike their first album, it featured their renditions of several recent popular gospel songs, such as “The Baptism of Jesse Taylor” and Dottie Rambo’s “Mama Always Had a Song to Sing,” traditional favorites like “There’s a Higher Power” and “When I Wake Up to Sleep No More,” and new originals such as Ben’s “The Wars Rage On” and David’s “I Want to be Saved.”  Especially noteworthy were two a cappella selections, “I Need Jesus” and “You Never Mentioned Jesus to Me.”

The group disbanded shortly after their last release.  Although their tenure in the bluegrass spotlight was relatively brief – four years – their legacy has continued.  Prime examples of their best work can be found in two CDs that appeared as part of Rebel’s Vault Masters series, The Legendary Marshall Family Volume One and Volume Two.